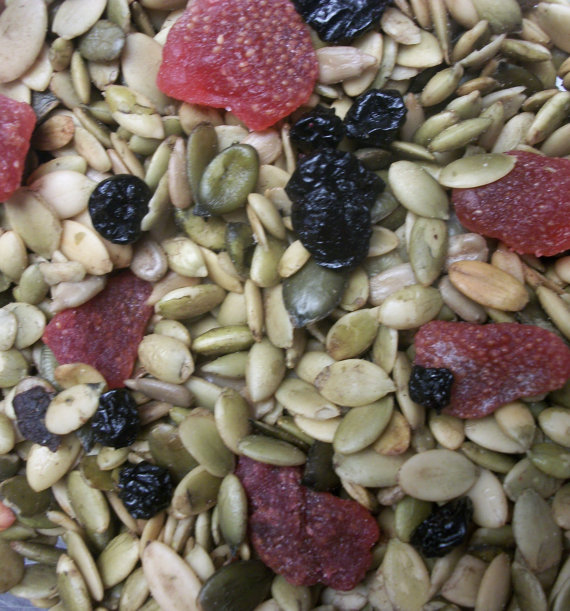 DELICIOUS AND NUTRITIOUS PEPITAS ROASTED AND SALTED TO A CRUNCHY PERFECTION ! WITH SWEET AND SOFT DRIED STRAWBERRIES AND BLUEBERRIES !

Pumpkin seeds have long been valued as a source of the mineral zinc, and the World Health Organization recommends their consumption as a good way of obtaining this nutrient. If you want to maximize the amount of zinc that you will be getting from your pumpkin seeds, we recommend that you consider purchasing them in unshelled form. Although recent studies have shown there to be little zinc in the shell itself (the shell is also called the seed coat or husk), there is a very thin layer directly beneath the shell called the endosperm envelope, and it is often pressed up very tightly against the shell. Zinc is especially concentrated in this endosperm envelope. Because it can be tricky to separate the endosperm envelope from the shell, eating the entire pumpkin seed—shell and all—will ensure that all of the zinc-containing portions of the seed will be consumed. Whole roasted, unshelled pumpkin seeds contain about 10 milligrams of zinc per 3.5 ounces, and shelled roasted pumpkin seeds (which are often referred to pumpkin seed kernels) contain about 7-8 milligrams. So even though the difference is not huge, and even though the seed kernels remain a good source of zinc, you'll be able to increase your zinc intake if you consume the unshelled version. While pumpkin seeds are not a highly rich source of vitamin E in the form of alpha-tocopherol, recent studies have shown that pumpkin seeds provide us with vitamin E in a wide diversity of forms. From any fixed amount of a vitamin, we are likely to get more health benefits when we are provided with that vitamin in all of its different forms. In the case of pumpkin seeds, vitamin E is found in all of the following forms: alpha-tocopherol, gamma-tocopherol, delta-tocopherol, alpha-tocomonoenol, and gamma-tocomonoenol. These last two forms have only recently been discovered in pumpkin seeds, and their health benefits—including antioxidant benefits—are a topic of current interest in vitamin E research, since their bioavailability might be greater than some of the other vitamin E forms. The bottom line: pumpkin seeds' vitamin E content may bring us more health benefits that we would ordinarily expect due to the diverse forms of vitamin E found in this food.

WE OFFER OUR PEPITAS WITH STARWBERRIES, BLUEBERRIES, AND OTHER DRIED FRUITS !!! FOR A HEALTHY ADDITION TO YOUR DAILY DIET !